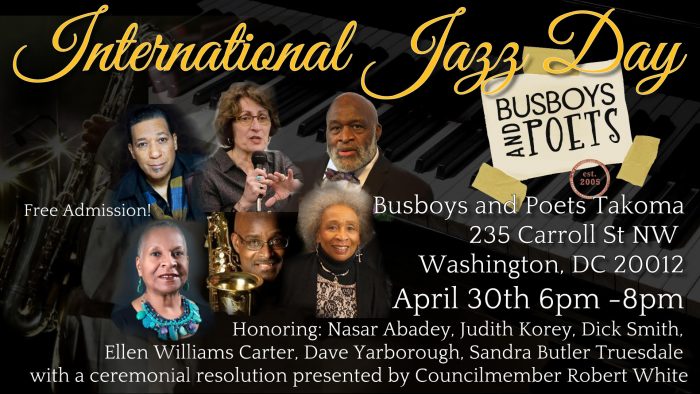 This event is FREE admission and open to the public.

Washington, DC, April 2, 2017 –  The DC Jazz Lobby, a subset of the Capitol Hill Jazz Foundation, will celebrate International Jazz Day, Sunday April 30th, by honoring 6 individuals with a program held at Busboys and Poets, Takoma location, from 6pm – 8pm.  The DC Jazz Leadership & Service Awards will annually recognize individuals within the DC jazz Community who have worked to promote, support, and uplift members of the DC Jazz scene.

“Establishing an event that not only recognizes individuals that have worked to further the reach of Jazz in our community, but to help promote Jazz Appreciation Month and International Jazz Day is essential”, said Aaron Myers, organizer with the DC Jazz Lobby and board chairman of the Capitol Hill Jazz Foundation.  “With DC playing such a pivotal role in Jazz, I feel this is very appropriate.”
Jazz Appreciation Month was created in 2001 by John Edward Hasse, PhD, curator of the Smithsonian’s National Museum of American History.  Last year, DC City Council-member Laruby May introduced a resolution recognizing DC’s involvement in Jazz as well as the influence of Women in Jazz.  This year, a resolution was introduced by Council-member Robert White recognizing Jazz Appreciation Month, International Jazz Day while also recognizing the 100th birthday of Ella Fitzgerald.  “I introduced the Jazz Appreciation Month and International Jazz Day Ceremonial Recognition Resolution of 2017 to recognize the local musicians who have made great contributions to the art form.” said At-Large Council-member Robert White.   “It’s important to acknowledge the impact music and the arts have on our communities and on the molding of our young people.”
In November 2011, the United Nations Educational, Scientific Organization (UNESCO) officially designated April 30th as International Jazz Day in order to highlight jazz and its diplomatic role of uniting people in all corners of the Globe.  Last year, Washington DC was the host city for International Jazz Day with over 100 artists attending an event at the White House hosted by former President, Barack Obama.  With the creation of the DC Jazz Leadership & Service Awards, DC will annually have an annual set event that will be added to the roster of International Jazz Day activities worldwide.
This year, honorees will include: Nasar Abadey, Judith Korey, Dick Smith, Ellen Williams Carter, Dave Yarobough, and Sandra Butler Truesdale, with a ceremonial resolution being presented by Council-member Robert White. “I want to thank the DC Jazz Lobby and it founding members, as I am truly honored and privileged to receive this recognition at this point in my life.” said drummer and educator Nasar Abadey, who is a staple on the Jazz scene and mentor to many musicians.   “It also gives me great pleasure to share this acknowledgement with such a stellar group of Jazz Musicians, Aficionados and Activists who celebrate the legacy of this great music.  This commendation also coincides with my 70th Birthday this year, and 50+ years of paying tribute to this exceptional American Art form, as a professional performing artist.”
Over the last year, there has been an up tic in activism from members of the creative community in DC as performers and presenters work with the District Government to ensure spaces remain open and that contributions from creatives are included in the creative economy.  Both last year and this year, legislation has been introduced to address and remedy concerns identified by these efforts.
“The DC Jazz Community owes a great deal of gratitude to these awardees for their service.” said Herbert Scott, Jazz saxophonist and Executive Director of the Capitol Hill Jazz Foundation.  “This event demonstrates the storied legacy of the men and women that are working to keep the DC Jazz Scene vibrant.”
(DC Jazz Leadership & Service Awards/ Sunday April 30th / 6pm – 8pm / Busboys and Poets – Takoma is located at 235 Carrol St NW, Washington, DC 20012.  This event is free admission and open to the public.)